In the winter of 1953, a group of friends were sitting around the bar of the Whippernon Club in Russell, regaling each other with tales of their canoeing prowess. Dick Waterhouse, the club owner, challenged the braggarts to prove their skills in a race down the Westfield on the first Sunday in April. The prize would be a cold case of beer, courtesy of Waterhouse. Word of the challenge reached Al Hodges, owner of the Wildcat Springs Restaurant, situated on the West Branch of the river in Chester, about ten miles upstream of the Whippernon.

Hodges added another case of beer, doubling the prize. With that, the course of the race was set, starting at one bar and ending at the other. Word of the challenge spread and, on race day, a half-dozen canoes with a dozen hardy paddlers congregated in the chilly water. Mostly locals, the racers felt confident that the prize would be won by one of them and shared with the others. Instead, a team from Southwick won and took the prize home, leaving the locals to buy their own beer.

In those early races, a cable was stretched across the river and the stern paddler of each team would hold on to it until the signal to start was given. The race was a simple affair with a mass start. The winner was determined just as simply: the first boat to reach the finish line.
In the 1993 race program, John Tucker remembered competing in that first race. He said that it wasn't well publicized and that many people weren't aware of it. He recounted, "We were coming along at a fairly good clip when we saw some fellows fly-fishing in the middle of the river. We hollered at them to 'look out,' but they couldn't figure out where the voices were coming from. We took 'em by surprise - they never expected to have a canoe sneak up on 'em like that!"

By 1960, the race field had outgrown the capacity of the river to allow a mass start and the current time trial format had been adopted. Life preservers, which were shunned in the early days as unmanly, were being required by state officials who patrolled the riverbanks. The race had grown to the point that it was gaining notice in Boston.

In 1963, Jane Coffin became the first woman to compete in the race when she entered with her husband Stewart. In those days, it was considered unseemly by many for a woman to compete in sporting events, especially with men. Today, women comprise a major portion of the field.

In the mid 1960's, under the leadership of Howard Mason, the race was moved to the East Branch to make the water level of the river more predictable. The free-flowing West Branch was dependent on rain and melt-off, while releases into the East Branch from the Knightville Dam were controlled by humans.

The race came of age in the 1970's under Merritt Andrews, and later Jeff Defeo and Jurgen Igel followed for the past several years by Ed and Karen Smith. Race classes were created to allow people of different skill levels, or with equipment of varying race-worthiness to compete more equally. The Novice Race was introduced, making the annual event into a two-day affair. Clinics were offered for the first time to introduce newcomers to the sport and to promote canoe safety.

Other changes followed: The predominance of wood-and-canvas and aluminum canoes of the early days gave way to ABS, fiberglass and Kevlar. Clothing that was barely distinguishable from normal work attire changed to lycra and neoprene while drab colors became a veritable rainbow. Ash beavertail paddles were displaced by spruce and cedar, Kevlar and Graphite; straight-shaft paddles gave way in large part to bent-shafts.

Today, the race looks much different than in those early days. The participants are a cross-section of the demographics of modern America and technology has changed every facet of race gear from watercraft, paddles and clothing, to timing and communication of the results. It's likely that Dick Waterhouse and Al Hodges would barely recognize it as the same event, but they'd likely glow with pride that the race they began with a humble two cases of beer continues to thrive. 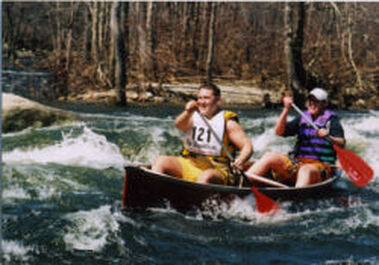